Cannabis Sales Surges Because of COVID-19

They've locked us down. At first, we were told to practice social distancing, but for some people that was vague. Most states are implementing and being direct when talking to citizens. In most states, all non-essential businesses are closed. People should only be in public if they perform one of those essential jobs or if they need food, gas, alcohol, and even weed.

If Americans and Canadians are stuck inside, you know they're preparing for their isolation. Some of those people are stockpiling cannabis to prepare themselves for the coronavirus pandemic.

According to numbers received from Flowhub, a cannabis point-of-sale and data platform, from March 16 through March 22, sales of recreational cannabis across California, Colorado, Oregon, and Arkansas were up 50% while medical marijuana sales rose 41% from last year’s figures.

As I mentioned earlier, U.S. states and Canadian provinces are trying to beat the fast-spreading virus, COVID-19. By deciding to issue stay-at-home orders, restricting business operations, and closing down borders.

According to the CDC website on March 24, the total of cases in the U.S. is 44,183 and the total deaths are 544. This includes 50 states, District of Columbia, Puerto Rico, Guam, and the U.S. Virgin Islands.

For some, it’s been a little over a week since they've instructed people to stay home, but for others, they were still living life as normal as possible. However, with the new implementation of instructing citizens to stay home and non-essential businesses to close has increased the seriousness of the situation.

Legendary investor Doug Casey has made millions speculating in lucrative gold mining companies for over three decades. Now he predicts we’re on the cusp of what could be the biggest bull market for gold we’ve seen in a long time. Gold’s biggest potential still lies just around the corner.

In this exclusive video he reveals:
- How to play the bull market in gold
- What every investor needs to know to pick winning resource stocks
- How to ready your portfolio immediately 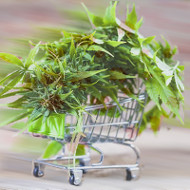 In Ontario, Canada, online sales on its government-run, Ontario Cannabis Store’s website surged over the past two weeks. And orders soared more than twice as high two weeks ago.

The demand is there and increasing making things get more serious and people realizing that they’ll be staying inside longer than they expected.

Jamie Pearson, CEO of California-based Bhang Inc., which sells cannabis-infused beverages, chocolates, and other products, experienced a rise in sales, and he expects to increase revenue and profits this quarter.

There are few industries that can survive a recession, and the cannabis industry might be one of those industries.

The cannabis industry is showing itself to be recession-proof, but like this, it’s important to understand that the spike in consumer demand is probably not going to last long.

Even though this might be an industry that can withhold hardships, it’s important to realize that we need to be realistic with it. This consumer demand won’t last forever, at least not the kind we're experiencing now. We (hopefully) won’t be in self-isolation for much longer, which means people will be back to buying their normal quantities of weed.

1 Cannabis Sales Surges Because of... 2 Is The Market Adjusting to Social... 3 Airlines Are Falling Ill 4 Coronavirus Worries the Fed 5 Amazon Is Set to Open Its First...

1 Cannabis Sales Surges Because of... 2 Is The Market Adjusting to Social... 3 Airlines Are Falling Ill 4 Coronavirus Worries the Fed 5 Amazon Is Set to Open Its First...