Our services are now back online and we’re actively working to fully return them to regular operations. We want to make clear at this time we believe the root cause of this outage was a faulty configuration change. We also have no evidence that user data was compromised as a result of this downtime.

Facebook had already been having a rough week. On Sunday a whistleblower, Frances Haugen, went public in a 60 Minutes interview about Facebook and some of the inner workings of the company.

Then on Tuesday, Haugen went to the Senate to discuss Facebook and how the world needs to rethink the company and what its objectives are.

She leaked internal documents of Facebook that indicate that the company ignored internal warnings about misinformation and dangerous content on its platform.

Haugen was a product manager for civic misinformation at Facebook. She mentioned how Facebook’s algorithm could steer young users to harmful content. Haugen said on Tuesday to Congress:

I saw that Facebook repeatedly encountered conflicts between its own profits and our safety. Facebook consistently resolved those conflicts in favor of its own profits. The result has been a system that amplifies division, extremism, and polarization — and undermining societies around the world.

She also had this to say in her deposition:

I came forward because I recognized a frightening truth: almost no one outside of Facebook knows what happens inside Facebook. The company’s leadership keeps vital information from the public, the U.S. government, its shareholders, and governments around the world.

The deposition was shocking, but also not that shocking.

Facebook is a business and it needs to keep making money, and for it to make money it needs to keep growing its engagement. You could say that Facebook has greatly benefited from pushing content that creates misinformation and harmful content within the U.S. The engagement on controversial posts is higher than on a photo someone shared of their grandkid, so what makes you think that Facebook will opt to decrease that kind of engagement if that’s what creates money for it?

Not to mention that recently, there was news about Facebook potentially launching an Instagram Kids. This had already been delayed, and now — with Haugen's reports and deposition — it could be delayed further, maybe even indefinitely, if Congress decides to act on regulating big tech companies like Facebook.

Social media companies have always used the "freedom of speech" angle, but if they are pushing that type of content to raise their revenue, then regulations might need to be considered for the sake of our society and mental health.

Many in Congress have been working on breaking up and regulating “big tech.” Facebook’s recent outage has made it clear that the company has a lot of power and influence when it comes to our society and even our economy.

Facebook and the platforms that it has acquired over the years have become an important part of the everyday lives of people and even small and medium-sized businesses that rely on the platforms to reach customers.

The outage earlier this week has amplified the outcry about how the company needs to break up its control over its various platforms. Facebook critics believe that the company has monopolistic qualities.

Rep. Alexandria Ocasio-Cortez (D-N.Y.) was one of those critics, saying in a tweet: 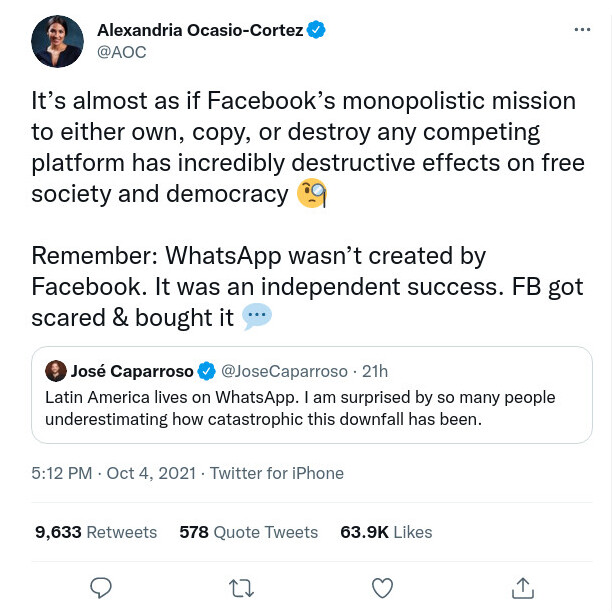 The Federal Trade Commission (FTC) has been pushing forward with an antitrust lawsuit against Facebook that targets its acquisitions of WhatsApp and Instagram. Facebook is a social media giant and these apps have a massive impact on our society. If Facebook is pushing an agenda that benefits itself as a company, then it doesn’t have the best intentions for its users and society, and that is extremely harmful.

Facebook responded to the FTC’s complaint by arguing that the agency does not establish a credible case that Facebook is a social media monopoly.

In my opinion, the break from checking social media was refreshing and I felt a little more productive than I usually am because I wasn’t scrolling through Facebook or Instagram. I think that we could benefit from less social media and fueling the beast that is Facebook.

Facebook has come under scrutiny, and the next steps that it takes are going to be very important for the company and its investors.