Last week, Tesla’s CEO, Elon Musk, revealed the company’s newest creation: the Cybertruck. The design of the rumored truck had been a complete mystery. So, on the day of the reveal, it sparked quite a bit of interest. Some critics, who weren’t too keen on it, thought the body too angular. Others saw the design as very futuristic.

Chris Livaudais, executive director of the Industrial Designers Society of America (IDSA), had this to say about it:

Like many, I was pretty intrigued, curious, humored, puzzled, and inspired by the introduction of the Cybertruck. I had heard that a truck was supposed to be released and had seen a bunch of speculative renders of what a Tesla truck “could look like.” Then this thing rolls onstage and you think… is that a joke, how can they be serious, WTF? Then you look at it a bit more and you wonder, is this what the modern truck world needed? Finally, a truck that looks like the future!

That’s true; the truck resembles something you might see in a science fiction movie. As a child, when I thought about the future, I would envision it having the essence of Tesla’s Cybertruck — sleek, industrial, and sharp. But is this really what the future will look like for trucks and other vehicles? Is it what the industry needs?

But then he agreed to make it official and go on camera for an exclusive interview.
And what he said is shocking...

If you’re interested, the full interview is available free for a short time. Watch the Interview Now.

Well, I’ll tell you one thing this unveiling as done: It launched a tangible example of the possible future of automobiles. Leave it to Elon Musk to give us that. 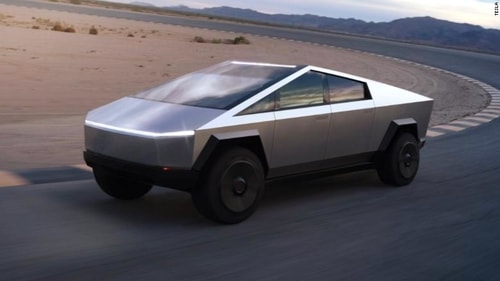 On Sunday night, Musk tweeted “200k,” indicating that the company had received 200,000 orders for the Cybertruck. Anyone interested in it must pay Tesla a refundable $100 pre-order fee. Tesla informs customers that they must take additional steps to complete their order:

After you submit your completed pre-order and the options you selected become available in production, we will invite you to complete the configuration of your Vehicle. We will then issue you the Vehicle Configuration and Final Price Sheet based on the base price of the model and any options included or that you select.

While this has been the cheapest pre-order price for any of Tesla’s electric vehicles, don't expect your Cybertruck to arrive in a week. It might be a while before customers have the option to fully purchase their vehicles.

And it wasn't entirely smooth sailing for the company on launch day.

Tesla’s design chief and Musk were on stage attempting to show the audience the durability of the Cybertruck, but, rather embarrassingly, did the opposite. The company’s design chief threw a metal ball at one of the Cybertruck’s armored glass windows to prove its shatter resistance. Unfortunately, the window cracked. When he threw the ball at another Cybertruck window, it shattered.

For most companies, this would be detrimental. But with Tesla's cult following, the company wasn't affected too much. Last Friday, shares fell 6.1% to close at $333.04. Deutsche Bank noted, “The shattering of the truck’s unbreakable glass windows during the live demonstration was not a good start.”

But Tesla still had hundreds of thousands of preorders by Sunday night, with $100 from each customer. Now the company just needs to make enough Cybertrucks to meet that demand.