The chemical element Au, or gold, is a soft, malleable metal that was brought to our planet through a meteor bombardment about 4 billion years ago.

Space rocks carrying gold particles collided with Earth and buried cells of gold into our planet.

The heating and cooling of the earth repeatedly liquefied and solidified the cells, creating the veins of gold we tap into today.

Essentially, gold is incredibly shiny space matter. It has been used as a symbol of wealth as far back as archaeology has documented.

It still is — today gold is used to make jewelry (and rappers’ grills).

When someone wins a competition, we bestow gold upon them. This metal has been the life’s work of explorers, conquistadors, and pirates.

Gold has been at the root of violent wars and invasions. Another fun fact: you can eat gold!

Society as a whole has come together in agreement that gold is valuable — one of the few things mankind has universally agreed upon.

I’m always a fan of the underdog, though, and in the world of precious metals, that would be silver. Silver isn’t incredibly rare like some other metals, but it’s a safe investment for the long term.

Even my grandma has shiny yellow bars under her mattress. In my opinion, someone needs to keep the thrilling, wealth-seeking, treasure-hunter legacy going. In 2015, that means palladium.

Palladium is a close relative of platinum. Both of these are lustrous, rare, durable, and especially useful in jump-starting chemical reactions.

If you are familiar with Marvel comics, you might know that palladium is a material in the arc reactor in Iron Man’s chest — the source of his powers but also poisoning him from within. But let’s not hold that against the metal.

Palladium is gaining momentum as it slowly begins to replace platinum as a more affordable material in the construction of catalytic converters.

We know now palladium can perform the same function as platinum but for 25% less cost.

According to Annuity IQ, “The fact that there is a very strong possibility that automakers will dump platinum for palladium is reason enough to buy the metal. The last time this happened, palladium went to the moon.”

Instead of nasty pollution, vehicle exhaust is now mostly water and carbon dioxide.

New research into palladium reveals it may actually be useful for filtering unclean water as well.

Thanks to emissions regulations, catalytic converters are now a required component of all vehicles. Predictions maintain that as global automotive production increases, so will the demand for palladium.

Most of the growth of the automobile industry will be driven by BRIC (Brazilian, Russian, Indian, Chinese) economies. Add to that the increasingly restrictive emissions guidelines, and we’ve just witnessed a flawless equation for palladium success.

There is only one palladium mine in the United States. Russia controls the majority, with about 41% of the palladium sources, but South Africa is a close second at 38%.

In South Africa, political instability, civil unrest, and a history of violent, tumultuous mine strikes make the palladium source a risky gamble.

The ripple effect from the Marikana massacres still lingers, and the country is working through a policy that discourages violent labor actions.

Earlier this year, electricity shortages and long-term strikes prevented the progress of several mining projects. South Africa has committed to creating an environment conducive to successful mining investments, but we have yet to see if the nation can overcome the residual effects of labor conflicts.

Norilsk Nickel, the largest miner in the country, has repeatedly failed to meet production levels that satisfy global demand.

State stockpiles have been slowly depleted in order to fill the deficit.

The West is very unlikely to ban imports — we need palladium. However, recent geopolitical maneuverings, particularly Russia’s incursion into Ukraine, have created a highly volatile back-and-forth between Russia and the West. 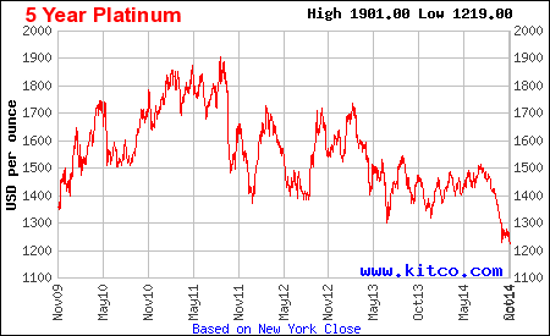 Both the EU and the United States have committed to maintaining their economic sanctions on Russia.

The Federation is now isolated. There’s no need to explain the "cornered animal" idiom here.

There are still some concerns that President Putin may respond to the sanctions with gestures of his own — specifically by ceasing exportation of essential materials. 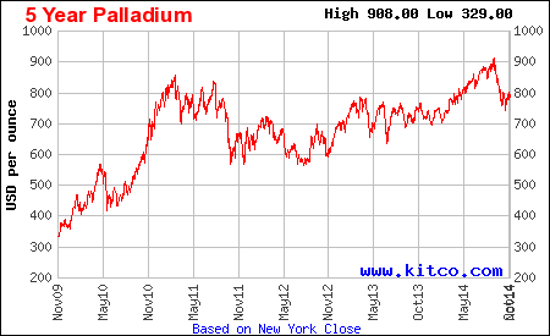 Anyone who’s taken an introductory economics class can see what we’re getting at here: Increased demand combined with shrinking supply leads to an increase in price.

This year, palladium prices surpassed those of gold. The price for one ounce of palladium currently sits at $781.50.
At the end of March this year, North American Palladium confirmed plans for a mine extension in Ontario.

The company’s shares have been up, and their presence in North America offers significantly more assurance in regards to stability and output.

According to Investing News, NAP reports a 16% increase in underground reserves and a 23% increase in near-surface resources, among others.

In total, the company rests with about 5.9 million ounces of contained palladium.

NAP has committed to further research and exploration investments, and the stock continues to rise.

Let's take a look at how all four precious metals are trading through popular ETFs, along with their relative strength:

As we can see, all four metals have been trading down recently.

We also see extremely low relative strength index values. This suggests all four may be extremely oversold and undervalued.

The palladium play in the above chart is Physical Palladium Shares (NYSE: PALL), which is backed by the physical metal and stored in vaults in London and Zurich.

As is the case with the majority of precious metals, the most reassuring way to know your investment exists in full is to be like my grandma and keep physical bars or coins under your mattress.

My grandma is a sweet woman who bakes cookies I would kill for, but she’s no investment expert.

We’ve already mentioned that palladium can be toxic (remember Iron Man?), so particular storage techniques are required. For the majority of people who don’t want to store bars of palladium in their homes, ETFs are the way to go.